The SunKing Parabolic has an incredibly even light spread and a design that produces low heat levels directly under the lamp, meaning that it can be lowered further than is often possible when using conventional reflectors without burning the tops of plants.

The SunKing Parabolic is a curved reflector that houses your choice of HID lamp via its supplied E40 lamp holder. What marks out the SunKing from cheap alternatives on the market is the high-quality feel of its components - the SunKing is engineered from materials that won't degrade quickly (reducing efficiency) like those of its competitors, delivering excellent results consistently over long periods of time. Unlike most other reflectors, the lamp in this unit is mounted vertically and the majority of its output is directed sideways towards curved surfaces and reflected back down towards the canopy. This method creates a more uniform spread of light than when using horizontally mounted lamps. Naturally, an even light spread leads to a more even canopy, adding consistency when growing larger numbers of plants in a given area. These effects are all enhanced greatly by the SunKing's 'hammer-tone' finish, which helps eliminate hot-spots, an issue that occurs when light is too highly concentrated in a particular area.

It also features vents around the lamp holder to allow heat to escape through the top of the reflector. This, combined with the reflector's open design, means that temperatures directly under the lamp are much lower than those under other reflectors, meaning that the SunKing can be positioned closer to the top of plants without causing burning. The SunKing is supplied with a 375cm power cable with an IEC (kettle lead) connection. The IEC adapter is used to connect to a ballast of a suitable output for the lamp fitted to the reflector.

5 other products in the same category: Barn shade complete with an E40 fitting and power cable. The EnviroGro PRO Single or Double/Twin CFL Reflector by LUMii brings together all the benefits of a parabolic design with the energy saving qualities of compact... 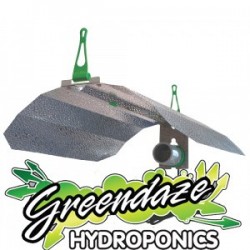 The Lumii Maxii light reflector is a Dutch barn style reflector, which is very simple and easy to use, unlike other lighting equipment the Lumii Maxii Reflector has... The DAYLIGHT 315W Horizon Reflector is designed to give extremely uniform PAR levels, over a wide-ranging area.  Ideal for supplementing your existing HPS grow rooms...